A medical cannabis patient has spoken out about being treated “like a criminal” after police seized his prescription from his home.

Ryan Specter, says police need to be better educated about the legality of medical cannabis, after his medication was seized by officers on Sunday 24 April.

Specter, who has had a prescription for medical cannabis since February 2021, to manage symptoms of his ADHD, found himself facing arrest after making a complaint to police about a neighbour.

The 27-year-old felt he was being unfairly targeted following complaints about the smell associated with his medical cannabis use.

Prior to the incident, Specter sent police video footage of an individual shouting a “foul language remark” at him, insinuating that he was using cannabis illicitly.

Alongside this, he says he sent officers documentation of his prescription, issued through Sapphire Medical Clinics, along with his Cancard membership details and photos of his labelled products and vaporiser.

But when police visited the property in Poringland, Norfolk, it was Specter who found himself facing questions from the officers around the legality of his medicine.

This is despite Specter showing them an electronic copy of his prescription and his prescribed product, which was correctly labelled and in its original packaging.

“In this case I showed them the best copy of my prescription I had at the time, which was electronic, and the packaging itself, which completely aligns with the advice given by pharmacies, clinicians and the community as a whole,” Specter told Cannabis Health.

“The defence the officer gave against believing me was that ‘any old person’ could print off a prescription label… they might but it’s a lot of effort to go to.”

The officers stated that they would need to take Specter’s medication while they gathered more evidence to prove it had been prescribed by a doctor, threatening him with arrest and placing him in handcuffs, when he refused to hand it over. 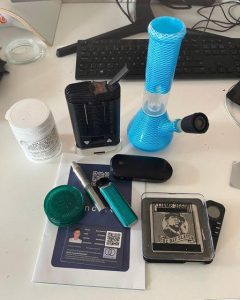 Ryan has had a prescription for cannabis since March 2022.

“When they threatened to take me in, the only reason I didn’t let them arrest me was because I had work the next day and I’m self employed, so I can’t take a day off,” he continued.

“[In a way] in doing that, it’s seen as a signal of guilt on my part, but I don’t feel in any way remorseful for having access to medication.”

Police have since been in contact with Sapphire Medical Clinics to verify Specter’s prescription, and say they have now made arrangements for his medication to be returned.

However, Specter says he will be pursuing potential compensation for the incident, adding that he was “extremely” alarmed at the lack of knowledge the officers had around the legality of medical cannabis.

“Unfortunately I don’t think this is an isolated incident,” he said.

“Given that I’d say one third of their work is going to be dealing with low-level drug crime and possession, having an intimate understanding of the laws around it is important.

“I don’t think people should need a law degree to join the police force, but when it comes to laws you are actively dealing with, you should know them. Why are they not trained on laws which affect their day to day work?”

It comes just months after Liam Lewis had his prescription seized by police on the isle of Shetland, after the package was intercepted at the Royal Mail sorting office.

But Specter also believes that efforts need to be taken from the industry and central government to raise awareness of the fact that cannabis has been legal on prescription since 2018.

He said: “I think the messaging is a major issue at the moment, that needs to be addressed around the medical cannabis industry… but it’s not necessarily just on the industry, the Government doesn’t do enough to keep people up to date on laws.”

Specter hopes to highlight the need for better awareness of medical cannabis outside of the sector, by sharing how he was treated by police.

“I was treated as a criminal and not as a patient,” he said.

“It didn’t need to be dealt with as heavy handedly as it was. It should take far longer for a complaint being made by somebody to be turned into criminal scrutiny, especially given a body of evidence that was easy enough to access.”

Specter added: “Another thing I found frankly offensive was when they suggested I should make changes to my use to make it less problematic for my neighbours – we’re talking about a person using a cannabis vaporiser in a property with windows and doors closed and draft excluders.

“I felt like it was a witch hunt from the get-go.”

A spokesperson for Norfolk Police told Cannabis Health: “Officers were called to an address in Poringland after a man reported ongoing issues with a neighbour who was unhappy about the smell of cannabis smoke emanating from his property. When officers arrived, the man said he had been prescribed medicinal cannabis and showed them a white plastic bottle of herbal cannabis.

“He didn’t provide them with a Cannabis Card (Cancard) so they couldn’t verify his claim using the Cancard app and the scheme’s helpline – which officers called while they were at the man’s home – was also unable to verify that he had been prescribed medicinal cannabis.

“A label on a medication bottle is not sufficient evidence to prove that a person is legally allowed an illegal drug.

“That being the case, and as in all cases where officers suspect someone may be in possession of an illegal drug, they seized the drug and explained they would need to make further enquiries with the private pharmacy. This has now happened, and the private pharmacist has confirmed the drugs were legally prescribed. Officers have contacted the owner and made arrangements for the return of the cannabis.”

Specter is a Cancard holder and disputes the claim that he did not provide them with the ID card on the day.

The scheme is designed to protect patients from arrest, by allowing police to check their legitimacy through its database, although it has no legal standing.

A spokesperson from Sapphire Medical Clinics said: “We are unable to comment on individual cases due to patient confidentiality. However, it’s important to highlight that medical cannabis was legalised for prescription in November 2018 across the UK.

“As the first medical cannabis clinic approved by the Care Quality Commission (CQC) in December 2019, we abide by stringent regulations which include assessment by a specialist doctor and the requirement that prescriptions are dispensed by an approved and licensed pharmacy.

“Fortunately we are assured that this is a very rare event, and Sapphire Medical Clinics is committed to continuing to expand educational resources to improve awareness, knowledge and understanding of medical cannabis.”

The video on the body shows the moment when Edwin of Africa was filmed...