Gabby Robinson, a yoga and pilates instructor living with fibromyalgia, shares her top tips for coping with the condition.

As a mum of twins and with a busy online yoga and pilates business, Gabby Robinson was constantly exhausted.

But it was more than that, she felt as though her body was giving up on her.

Three years ago Gabby was diagnosed with the chronic condition, fibromyalgia.

According to the Mayo Clinic, fibromyalgia is a disorder characterised by widespread musculoskeletal pain, accompanied by fatigue, sleep, memory and mood issues.

According to the NHS, ‘the exact cause of fibromyalgia is unknown, but it’s thought to be related to abnormal levels of certain chemicals in the brain and changes in the way the central nervous system (the brain, spinal cord and nerves) processes pain messages carried around the body.’

There are many reasons why someone might be diagnosed with fibromyalgia. It can arise after a viral infection, an injury, trauma, PTSD, toxic load, an accident or other high stress event.

Fibromyalgia can be painful, exhausting and terrifying at times. 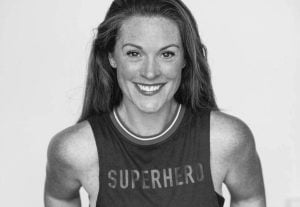 Gabby Robinson is a yoga and pilates instructor

Three years on, Gabby still has flare ups but they don’t last as long and she knows it will pass.

Along the way, she has learned how to monitor and modify her lifestyle, behaviour, workload, nutrition, rest, hydration, stress levels and exercise formats constantly to make sure her body is getting what it needs.

Rest is so important and so is stimulating the mitochondria, the power houses or batteries, of our cells.

After Gabby was diagnosed, the consultant and doctor prescribed strong drugs such as Amitriptyline and Gabapentin, in order to help the chronic nerve pain, relax her body and reduce the anxiety surrounding how she felt.

But she decided not to take it, favouring a more natural approach.

“I didn’t like the idea of taking pharmaceuticals and relying on them going forwards if this was going to be a long term issue,” said Gabby.

“I found that good quality CBD oil has similar positive effects to the prescribed drugs, with none of the side effects or addictive qualities.  I use the higher strength orange flavour CBD oil from FourFiveCBD to help settle my pain and discomfort and help me sleep better too.”

Many fibromyalgia patients are finding that CBD helps ease some of their symptoms.

In November 2021, research showed women with fibromyalgia are using CBD to help with their symptoms, instead of pain medication.

Participants were given a survey distributed by the National Fibromyalgia Association in April and May 2020. The results revealed that more than a third of the women were current CBD users, 81 per cent of whom said the use had ‘improved their pain.’ A further 76 per cent of users said they were able to substitute CBD for other medications, including opioids, NSAIDS, gabapentin and benzodiazepines.

It is hoped more data will be available soon, with a UK trial exploring the role of cannabinoids in the treatment of fibromyalgia, expected to get underway later this year.

While CBD can help with fibromyalgia, there are also a number of changes to your lifestyle that can help produce positive outcomes and reduce the symptoms.

Gabby’s 10 tips for living with fibromyalgia:

Localization is part of retail’s future