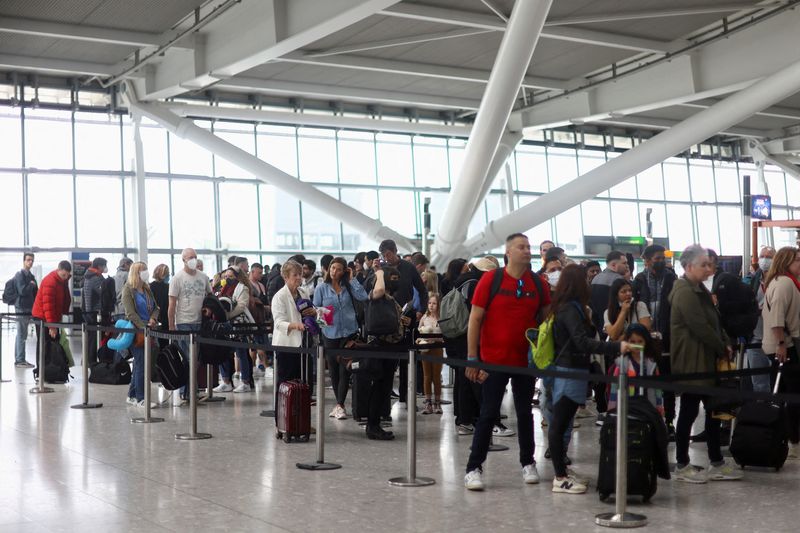 LONDON (Reuters) – Cancelled flights, long queues and staff shortages have disrupted the travel plans of British holidaymakers during the half-term break, a grim sign of possible summer strife for a global sector battling to rebound from a two-year COVID slump.

The next few months will be the first time since 2019 that the aviation sector will be able to enjoy a peak summer season free of substantial coronavirus restrictions, but staff shortages at airlines and airports may hinder that outlook.

Scenes of chaos have been seen at some European airports over the last week as people have started to venture abroad, sparked by a shortage of bag handlers, security and airline staff that led to huge queues, missed flights and furious customers.

In Britain, airlines such as TUI (LON:) and easyJet (LON:) have cancelled dozens of flights a week to improve customer service and reliability on remaining routes. EasyJet has even removed some aircraft seats to cut crew sizes.

“We believe this is necessary to provide stability and a better customer service at Manchester Airport,” TUI said after cancelling flights at the northern English airport.

Airlines have argued that following two years of turmoil, when travel was routinely banned, it would take time to recruit workers in tight labour markets, after many people deserted the industry for more reliable jobs during the pandemic.

Some airlines have tempered once-optimistic summer growth forecasts, and noted it is taking longer than normal for staff to get security clearance.

The British government said an “exceptionally high number of people” would be travelling this week during the half-term holiday, which includes a long public holiday weekend for the Queen’s Platinum Jubilee on Thursday and Friday.

A spokesperson for London’s Heathrow airport – Britain’s busiest – said there were queues but that the airport was “flowing”, while at Gatwick airport a spokesperson said “the airport is operating normally today but will be busy”.

But the problems are not limited to Britain, with Germany having seen strike action disrupt services in March, and with other countries now facing issues.

In Ireland, Dublin airport descended into chaos on Sunday when more than a thousand passengers missed flights as staff shortages forced travellers to queue for hours to pass through security.

In Sweden, the CEO of airport operator Swedavia has been summoned to parliament to answer questions about long queues at Stockholm’s Arlanda airport.

A top airline industry official on Tuesday played down the prospect of the disruptions spreading.

“There are issues in some airports, it’s not across the world,” said Willie Walsh, director general of the International Air Transport Association (IATA).