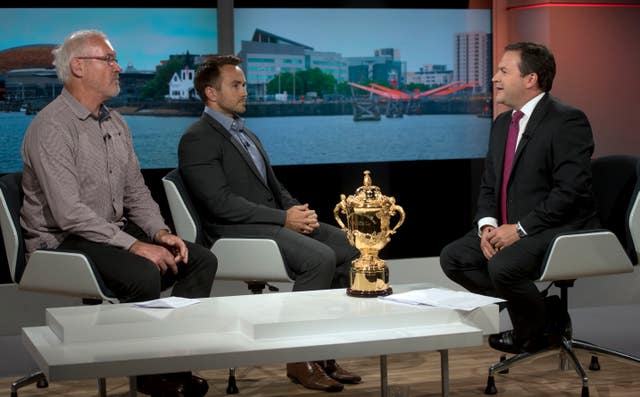 The 16-cap Wales number eight died in his sleep on a charity trek on the Inca Trail in Peru.

“I am devastated by this news,” Moore tweeted.

“Ed, I’m sorry I never told you how much I admired you as a broadcaster and as a man. Well, it wasn’t like that between us, was it.

“Condolences to Sue and your family. Sport has lost an iconic voice.

“I have lost a very dear friend. Goodbye Edward.”

Butler rose to prominence with Pontypool in the 1970s, representing Wales between 1980 and 1984.

He toured New Zealand with the British and Irish Lions in 1983, before forging a highly respected career as a commentator and broadcaster.

“The Prostate Cymru charity is devastated by the passing of its much loved ambassador Eddie Butler,” read a statement announcing the news.

“Eddie was the voice of Wales and we were honoured to have him as part of our charity. We will cherish the many memories we have of him.

“Over the last week Eddie once again showed his generosity and steadfast commitment to good causes by joining 25 Prostate Cymru fundraisers, including his daughter Nell, on the Inca Trail Trek to Machu Picchu.

“In the early hours of Thursday, September 15, Ed passed away peacefully in his sleep at Ecoinka base camp in the Peruvian Andes.

“He leaves behind his wife Susan and six children, who are very much in our thoughts.”

Butler represented Cambridge University from 1976 to 1978 while studying French and Spanish at Fitzwilliam College.

The imposing back-row forward made his Wales debut in the 18-9 win over France in January 1980.

After rugby Butler enjoyed a short stint as a teacher, then worked for a property development company – before finding another niche in broadcasting.

Butler moved on from stints with national newspapers to excel for the BBC in commentary on rugby, but also adding colour to major sporting events, notably coverage of the Olympics.

Welsh Rugby Union chairman Rob Butcher insisted his country owed Butler a sizeable debt for his contribution to the sport.

“For many Eddie was the voice of Welsh rugby and he will be sorely missed by supporters around the globe as well as his friends throughout the game and here at the WRU,” said Butcher.

“He proudly represented his country as a player, was a mainstay in press boxes around the world long after he retired from the game and has been prolific in the way in which he has served Welsh rugby in both the written and spoken word over decades.

“Our thoughts and prayers go to his family, who we also know well and cherish, and his close friends and colleagues at this incredibly difficult time.

“He was a unique individual on the game in Wales owes him a debt of gratitude for his contributions both on and off the pitch.”

The BBC director general Tim Davie also paid tribute to a “wonderful wordsmith” who voiced some of rugby’s most vital moments.

“Everyone at BBC Sport is shocked and saddened by this very sad news,” said Davie.

“Eddie was a brilliantly gifted commentator, writer and reporter whose passion for the game of rugby union shone through every broadcast.

“A wonderful wordsmith with a rich, iconic voice, he provided the definitive soundtrack to some of the greatest moments in rugby’s history.

“He will be much missed by all of us, our thoughts are with his family at this sad time.”

Opinion | Imperial fabrications for the platinum anniversary of the queen