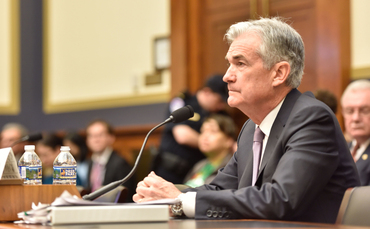 This percentage increase was in line with economists’ forecasts as US inflation is at a 14 year peak.

Federal Reserve chair Jerome Powel outlined the central banks’ bleak outlook, indicating that another large rate hike was likely by the end of the year.

He said that there was no “painless way” to dampen inflation and that while a soft landing was still the Fed’s target “no one knows whether this process will lead to a recession or if so, how significant that recession would be”.

This is all a long way from Powell’s ‘transitory’ messaging this time last year, which Mark Conrad, manager at Algebris Investments, said he had “badly missed the boat on” and “now it is likely exacerbating its prior policy error, by going into full hawkish mode with inflation expectations now well-anchored and core and headline inflation already on a downward path.

“Either way though, the higher-for-longer policy stance provides a strong revenue tailwind to banks, who are perhaps the biggest winners from the Fed’s hawkish turn.”

Although a large interest rate hike was expected markets were still rattled by Powell’s hawkish speech, with the Dow, S&P, and Nasdaq all closing down over 1.7%. Brent Crude prices closed down 0.35% to $89.83 following the decision but have climbed back over $90 this morning, according to Hargreaves Lansdown.

Derren Nathan, head of equity research at the firm, said that Powell’s references to the strength of US unemployment – which is currently at a 50 year low – was likely to give the Fed the confidence to “embolden its stance against inflation”.

Silvia Dall’Angelo, senior economist at Federated Hermes Limited, said that the Fed clearly sounded “determined to do whatever it takes to meet its inflation target”.

She said that although Powell had avoided too explicit a reference to an imminent recession, he made clear the Fed is ready to tolerate below-trend growth and a softer labour market as it focuses on quelling inflation.

At the same time, the full impact of Covid on the economy is not clear and there is uncertainty about the degree of monetary tightening that is required to bring inflation back to target without hurting the labour market too much.

“At this stage, based on the trade-offs it is facing, the Fed is willing to take the risk of overdoing it,” Dall’Angelo said.

Regarding portfolio allocation, Callie Cox an eToro analyst, said that rates staying high for an extended period of time, like the Fed is signalling, could weigh heavier on growth-focused areas, “so there could be benefit in staying defensive and realistic here”.

Our communities are blighted by low-traffic areas | letters

What You Need To Know By Benzinga