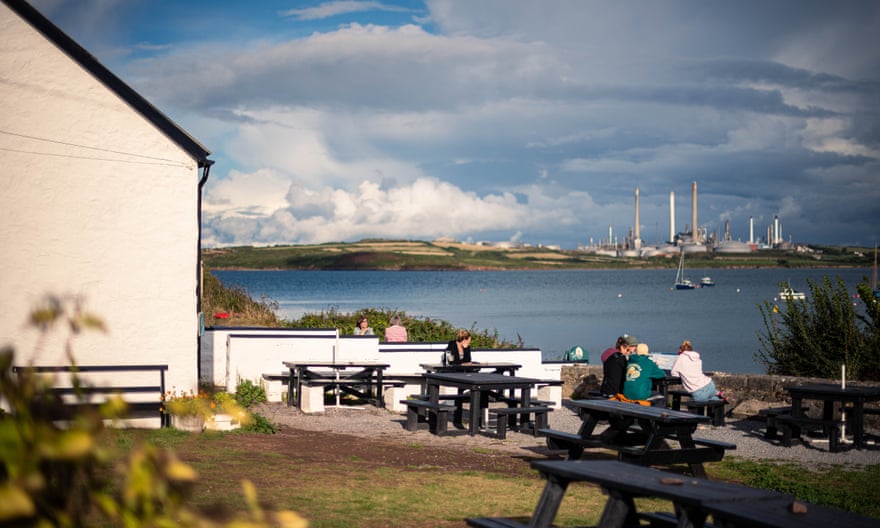 I should have set out on this walk at dawn – it’s shaping up to be a warm day, and as I leave the car park of the Old Point House I’m thankful for the shade of the trees on either side of the Pembrokeshire Coast Path.

I head towards Angle Point and the low cliffs above the Milford Haven waterway, one of the deepest natural harbours in the world and described by Admiral Nelson as “the finest port in Christendom”. The waterway has been in service for thousands of years: Vikings sheltered here from Atlantic storms; armies fought in and over it; whaling ships, fishing boats and ferries set sail from the harbours in Milford Haven and Pembroke Dock; and in recent times oil refineries and liquefied natural gas terminals have sprung up on its shoreline.

Yet the natural beauty of this remarkable estuary – placid, deep-blue waters lapping against rust-red cliffs and the occasional golden sand cove, above which a patchwork of green and gold fields stretches away into the distance – manages to overshadow the industrialisation and developments. I stop to watch a gas tanker pass at the peninsula’s most westerly point by the ruins of the East Blockhouse, just one of many defensive sites erected along the waterway over the centuries due to its strategic importance.

I have already passed two others – the Victorian Chapel Bay Fort, which has guided tours and a cafe, and Thorne Island, site of a 19th-century coastal artillery fort. At least 12 vessels have sunk off Thorne’s rocky shores over the years, the most infamous of which was the Loch Shiel in 1894, which had in its cargo scores of bottles of whisky, and led to a Welsh version of Whisky Galore.

This is also the coastline that the oil tanker Sea Empress crashed into in February 1996, spilling 72,000 tonnes of crude oil, with devastating effects on the local environment, wildlife and economy – pretty much everyone who lives locally has a tale of how it affected them.

I continue south to West Angle Bay. The Wavecrest Cafe above the beach tempts with the last chance of refreshments on this 10-mile hike. But I resist since I’ve brought my lunch with me and opt to enjoy it in glorious isolation amid the magnificent coastal views that the next three and a half miles of walking to Freshwater West will bring – indeed, on this stretch of the walk I see only four other walkers and a dog.

Although the sea cliffs along the southern shore of the Angle peninsula rarely rise above 50 metres, the descents to the various little coves along the way take me down almost to sea level and are surprisingly steep, reminding me of the fact that walkers who complete the entire 186-mile Pembrokeshire Coast Path – of which I’m walking just a part – also tackle more than 10,000 metres of ascent along the way, which is quite a feat.

I’ve been visiting Freshwater West for over 40 years to surf its waves, which are among the best in Wales

I eventually stop above West Pickard Bay to eat my lunch, with the high-pitched, metallic caws of a couple of choughs ringing out across the clifftops, and I’m treated to a spectacular display from a gannet diving for fish just offshore.

The views away to the south become better with every step of the way, as the golden sweep of Freshwater West and Frainslake Sands gets closer, fringed on one side by the pale blue Atlantic and on the other by dusky green sand dunes.

I have been visiting Freshwater West for more than 40 years to surf its waves, which are among the best and most consistent in Wales (Frainslake is off limits, being part of an MoD firing range). It has always had a wild and woolly feel to it, particularly when I first used to come here, when signs above the beach advised of hazardous rips and currents, informed us that surfing was “dangerous and irresponsible” and even warned of (literal) snakes in the grass – the adders living in the dunes.

In the 1970s and 80s, surfing was regarded as a rebellious activity, and surfers at Freshwater West were accused by a local councillor of setting a bad example which could “entice young children to their deaths”. Today, the sport is as mainstream as it gets, with a couple of surf schools operating at Freshwater West and the beach now patrolled by RNLI lifeguards.

This magnificent strand appears in its full glory as I walk above the northern end of the beach, from where I can revel in a three-mile coastal panorama stretching south as far as Linney Head. But then I have to turn my back on it all for a brief spell of road walking before I eventually turn down a minor road, where an avenue of trees gives some shade, and walk down to the south shore of East Angle Bay.

I can now see the end of my walk in the form of the Old Point House pub on the other side of the bay, and fortunately the tide is out so I can take a short cut across to it. When the tide is higher, you have to walk a further half-mile or so towards Angle village and then back on the dirt road that leads to the pub.

It’s a pure pleasure to remove my backpack, enter the cool interior of the pub and order a cold pint. It doesn’t touch the sides …

Google map of the route

The Old Point House has been a licensed ale house since 1802, although it is widely believed that it has been operating as a public house since some time in the 16th century, when it was the haunt of pirates, including John Callis, who was hanged for piracy in Newport in 1576.

The pub has been the local for the Angle lifeboat crew ever since the lifeboat station opened in 1868, and it is now a perfect stopping-off point for walkers on the coast path. It’s also dog friendly.

It was recently taken over by the owners of Cafe Môr, an old seaweed boat converted into a beach cafe that used to operate from a site above the beach at Freshwater West. Cafe Môr came with them and now serves burgers, crab and lobster rolls and fish butties in the pub garden from 11am to 5pm. The pub’s restaurant serves tasting plates which naturally focus heavily on seafood (and seaweed), and is open from 5pm to 8pm, Wednesday to Sunday. Space is limited so booking is advised.

There’s plenty of outside seating when the weather is good, with splendid views across East Angle Bay, and when a storm blows in from the Atlantic nothing could be cosier than settling down in the Old Point House’s snug bar and restaurant.
theoldpointhouse.wales

Next year the Old Point House plans to open two large bedrooms and a family suite with two bedrooms – all en suite or with private bathroom, with coast or country views. There will also be a self-contained lodge sleeping six in the grounds. In the meantime, nearby options include Castle Farm Camping , a small family-run farm with tent pitches and mobile homes on the outskirts of Angle, or The Globe (doubles from £130 B&B), a B&B in a renovated mansion in the village.

Readers reply: are there any foods that have not at some time been considered harmful in a study? | Life and style

Fuel retailers are riding for a fall by raising prices