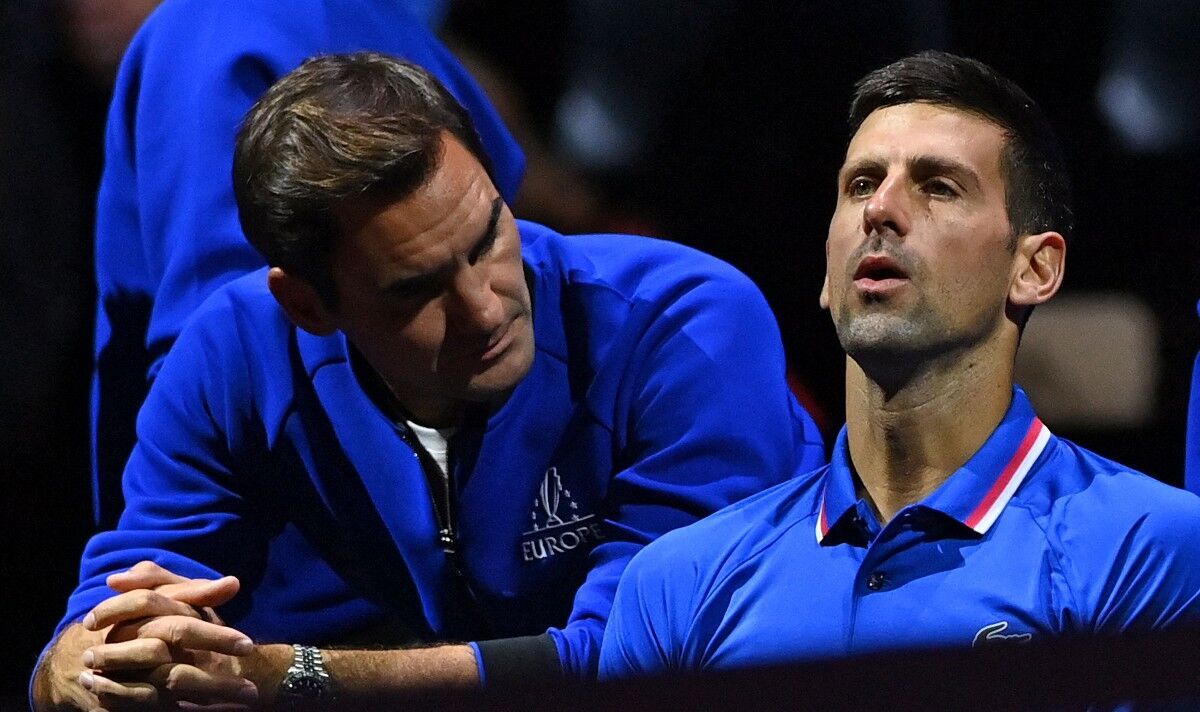 Roger Federer once again turned coach on the Team Europe bench in trying to motivate and inspire Novak Djokovic with the former world No 1 in a spot of bother in his match against Felix Auger-Aliassime. Djokovic was down a set and a break against the Canadian and Team World looked set to take the lead at a crucial point of the Laver Cup.

Djokovic had just held serve to keep the score in the second set at just 3-2 to Auger-Aliassime before returning to his seat. The entire Team Europe bench got up to stand next to Djokovic, but it was Federer who leaned over to have a word with his long-time rival.

Djokovic had appeared to be struggling with an issue on his right wrist, stretching it regularly and having it taped up. Federer appeared to notice where Djokovic was struggling, but also wanted to note where he thought Auger-Aliassime was vulnerable.

Federer asked: “What do you think? I feel like he’s not playing enough normal backhand to backhand rallies with you. I feel like you need to break down his backhand.

“I don’t want you to just start shooting and stuff and winners both sides.” Djokovic agreed, saying: “I agree, he’s kind of playing inside out and I’m not really feeling my backhand cross.”

Federer then went further, calling on Djokovic to change things up on his game plan and “avoid” certain shots.

He added: “So either forehand in his forehand corner or then backhands, but that inside out forehand lets try to avoid that. I know. Easier said than done, but you can make that happen.

“Make it hard for him. Like, really suck some errors out of him so you have to extend the rallies.”

Djokovic appeared fired up from the conversation for the following game and jumped out of his seat to get set on his side of the net. Djokovic quickly forced Auger-Aliassime into two errors, giving him a mini break in the game at 0-30.

Auger-Aliassime then sent one long as the Team Europe bench roared along with Djokovic, sensing a huge opportunity to break back in the set. A large part of Federer’s advice had been to bring Auger-Aliassime into longer rallies and Djokovic clearly took that on board for the break-point opportunity with the Canadian again firing long and losing his break advantage.

Tennis fans stand in line overnight to get tickets to Wimbledon