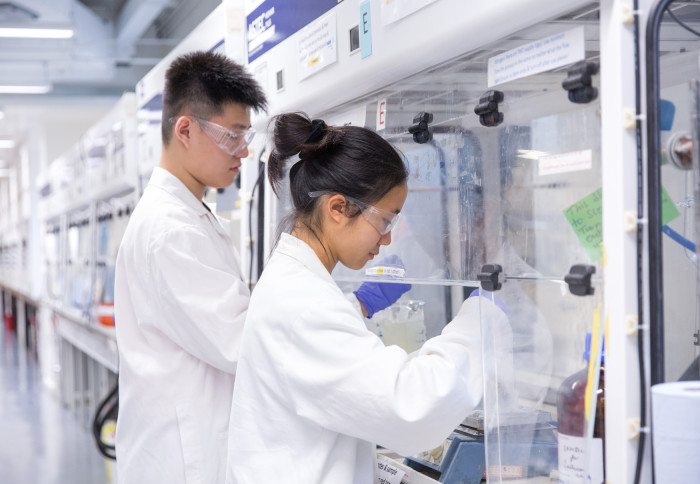 Five teams of undergraduate students have had the opportunity to develop impactful new technologies in Imperial labs this summer.

The Faculty of Natural Sciences’ Make A Difference (FoNS-MAD) competition, which is open to all undergraduate students from across the College, gives students the resources to develop low-cost technologies that will have a positive impact on society.

The finalists for this year’s competition have taken part in an 8-week funded lab placement over the summer months, where they received the opportunity to develop their ideas to the proof-of-concept stage – the point at which an idea is demonstrated to be feasible.

This year’s shortlist includes ideas ranging from a new way of making SPF moisturisers to efforts to prevent crops being destroyed by fungal pathogens.

The teams will submit a detailed summary of their findings and give a presentation on their projects to a VIP panel of experts at the final event on 26 October, where the winners will receive a prize worth £7000.

If you’d like to attend the event, which is open to all, you can register a place here.

Read more about this year’s finalists below:

Edward Wu explained that the initial idea for the project was to test for aflatoxins – a family of toxins produced by fungi – but this idea was changed due to the risks associated with working with the toxins in a laboratory setting.

The team decided to test for norovirus, which is safer and easier to acquire, instead, to help people with controlling outbreaks of the virus more quickly.

Yiming Huang said: “We want to use this project to, in a simple way, make the world a better place – but we really want to improve the technology into real-world use. We can use this competition to give us an opportunity to develop these test kits to better test for food toxins or viruses that can show up in food.”

“We found that the current products on the market use certain ingredients which are not very good for your body… We wanted to create something else for people to use.” Bhavi Kevat EcoFlav team member

The team members are taking food waste, particularly wasted fruit and vegetables, and using them to extract flavonoids for use in their product.

One benefit of using flavonoids for such moisturisers is that the compounds can protect for longer than conventional SPF moisturisers.

Wangxing Guo said that the idea came from a laboratory practical in his course where the compounds’ UV protection properties, which are usually used for agricultural work, were discussed. He wondered if these properties could be translated for use on human skin.

Bhavi Kevat explained: “We found that the current products on the market use certain ingredients which are not very good for your body. They have certain side effects, like being endocrine disrupters, if they are used for a long period of time. We wanted to create something else for people to use.”

The team explained that about 20 per cent of yield from staple crops around the world is lost annually due to fungal disease – with one issue with preventing this being that sprays are often used when symptoms appear on a plant, when it is too late to stop the disease.

Rust in Peace are instead attempting to use spores which can lay dormant on the plant and can be triggered to germinate and target the pathogens as they land on crops.

Shirin Bamezai said: “We were thinking, can we make a solution that senses the fungal pathogen and responds at the same time? So that we can eliminate it when it is most vulnerable.

“Our project is essentially trying to tune this spore system to a biomarker that is functional for all fungal pathogens, so that we get the spores turning into cells right when a fungal pathogen lands on the plant.”

“[The competition] is quite different from doing research in academia, because you have to think about other aspects of your research, such as industry, how to get a patent, and how to promote your ideas to the public and investors.” Betty Wang PolyTraps team member

The technology aims to deal with the issue of microplastics in wastewater to protect human health and the health of the wider ecosystem.

Betty Wang said: “The competition is exciting because you have the chance to collaborate with people and communicate with other teams to learn about new ideas and to make your ideas come true.

“It is quite different from doing research in academia, because you have to think about other aspects of your research, such as industry, how to get a patent, and how to promote your ideas to the public and investors.”

The team are currently looking into registering for a patent for their technology.

The team has created a platform that connects people when they are in need, either in everyday situations or an emergency, by allowing them to ask for assistance through the app by posting a request for help. This allows users who are nearby to offer help based on the information given in the post.

The idea was inspired by efforts to get support to people trapped in heavy flooding in China last summer.

Yuan Gao explained: “The situation was very chaotic, so they had to use online volunteers to help people organise the information and send it to police and other officials. We found that this process was very time-consuming.

“Then we came up with the idea that if we could have a platform to deal with people’s requests, it would make the whole rescue process easier and more efficient.”

How To Get Your Mac Ready For macOS Ventura