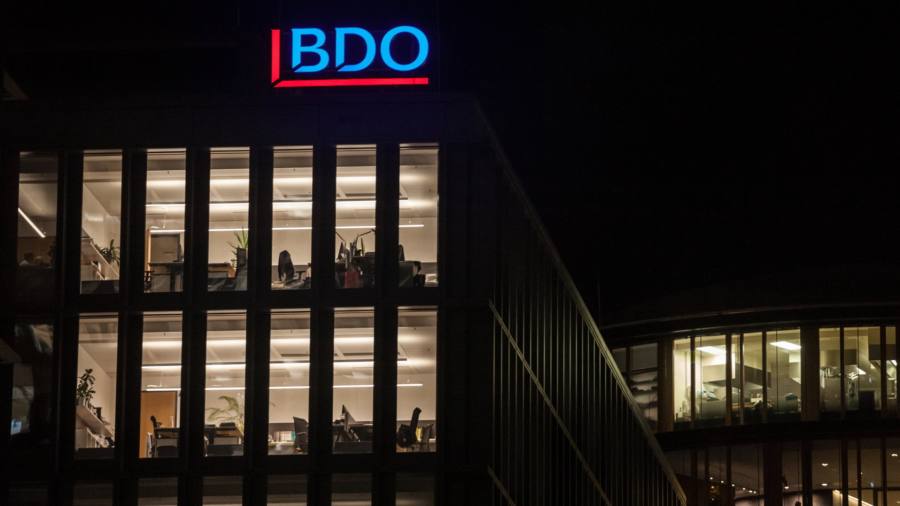 BDO has fired one of its accountants for tampering with files earmarked for inspection by UK regulators in the latest case of an auditor losing their job for retrospectively altering paperwork.

The dismissal follows a £14.4mn fine for KPMG this year after auditors at the Big Four firm deliberately misled regulators by changing audit records during inspections of their work at outsourcers Carillion and Regenersis.

The BDO auditor’s interference with the files was uncovered during a routine inspection by the Financial Reporting Council following the audit of an unnamed UK public body.

The FRC found that the auditor, who was a member of staff at BDO but not a partner, made changes to the audit file after the regulator notified the firm of the review.

Audit files, which contain the evidence and working papers used by auditors to reach their conclusions about a set of accounts, are generally archived once work is complete, meaning staff can no longer make changes.

In a response published alongside the FRC’s findings on Friday, BDO said it had immediately launched an investigation once it found out about the auditor’s actions. “The individual concerned was suspended within three days of the FRC querying the matter with us and dismissed following completion of the investigation,” it added.

BDO, the UK’s fifth-largest audit firm, reported the matter to the Institute of Chartered Accountants in England and Wales professional body when it realised what had happened, said three people familiar with the details.

The firm said the auditor had been able to make the changes because the file had not been archived. This was because its policies at the time did not explicitly require the archiving of files relating to value-for-money assessments, it said.

Auditors of certain public sector organisations in the UK, including local government bodies and NHS trusts, must issue an opinion on whether the organisation is securing value for money and keep a separate file on this work.

BDO said an internal investigation into other files that had not been archived did not find further problems. The regulator said the issue appeared to have been “isolated”.

But the FRC said it had found “significant weaknesses in the audit team’s documentation, archiving and in its engagement with us as a regulator”.

BDO said it was addressing the matters raised by the FRC and had changed its policies to require that value-for-money audit files be archived, similar to files relating to statutory audits of financial statements.

The FRC has powers to launch an investigation into an audit firm if it believes it has uncovered misconduct during one of its inspections, potentially leading to sanctions such as a fine or reprimand. It has not said whether it will do so in this case.

The details of the case were outlined in the FRC’s annual report on the quality of public sector audits.

The review found for the second year running that 30 per cent of financial audits of local government and health bodies were not up to standard, an improvement on the 60 per cent failure rate in 2020.

Sarah Rapson, the FRC’s executive director of supervision, said “the number of audits requiring significant improvement is unacceptable and urgent action is required by [audit] firms”.

The regulator reiterated concerns about delays in the filings of public sector audits. In the financial year ended March 2021, only 9 per cent of local authorities filed accounts on time.

Smiles and sparkles as the Adult Day Parade returns to Notting Hill | ...