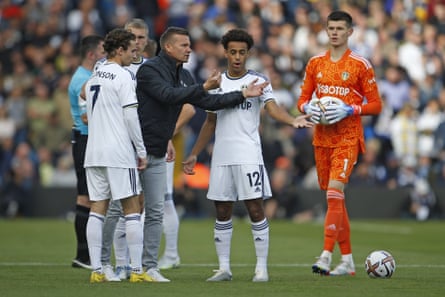 Almost 4,000 miles separates Leeds from Racine but the values Jesse Marsch absorbed as a child growing up in the Wisconsin factory town are arguably keeping him in a job at Elland Road just now. The midwest is a part of the United States noted for the striking humility and sheer “niceness” of its inhabitants and, at least away from the pitch, Marsch seems a typically empathic export.

The Leeds manager’s impeccable politeness, patience and openness in the face of relentless questioning about his somewhat precarious job security partly illustrate why club executives are so reluctant to sack Marcelo Bielsa’s successor. It is no exaggeration to say Marsch’s disarming warmth away from the pitch has bought him extra time in West Yorkshire.

His team travel to Liverpool on Saturday seeking a first Premier League win in nine attempts, while also aiming to end a run of four straight defeats. Opinion is divided on whether Marsch has been unlucky or is promoting a football version of Liz Truss’s disastrous “Trussonomics”.

“We keep finding ways to lose,” says Marsch. “Every game’s been in the balance but when the players’ stress levels are high their attention span isn’t. And when we get the breaks, we’re not seizing the moment.”

Many of Marsch’s peers would have turned decidedly tetchy in such circumstances, yet, publicly at any rate, that midwestern charm remains pretty much intact, apparently continuing to just about win its internal conflict with “Ivy League Jesse”. During the years he spent studying history at Princeton University, Marsch acquired a level of self-belief that can sometimes straddle the narrow border between confidence and cockiness.

This swagger generally served him well as a midfield enforcer for Chicago Fire and as the manager of New York Red Bulls and Red Bull Salzburg before a rather less successful stint in charge of RB Leipzig. “I’ve never lost this much in my entire career,” says the manager, who turns 49 next month. “I’m angry; I’m sick and tired of us being the better team and coming away with nothing. But the board and I have spoken multiple times and they’re very supportive.”

If his high-energy, high counterpressing system shows few signs of serious modification, Marsch is not entirely change-resistant. Significantly he has recently dialled down the alpha male technical area strutting which, quite apart from running counter to his general off-pitch persona, occasionally brought him into conflict with referees and rival managers as Leeds won last spring’s relegation skirmish.

Marsch’s revelations this week that, among other backroom alterations, psychologists would be playing a heightened role at Leeds’ training base near Wetherby, was perhaps a tacit admission that his sometimes overzealous touchline motivation had been a distraction and provoked often-costly ill-discipline. Confidence is another problem, and may explain why Patrick Bamford has, uncharacteristically, missed nine clear chances this season.

After spending last season sidelined by injury, Bamford is inching closer to full fitness, but although the striker’s movement remains excellent Marsch’s sole proven finisher has mislaid his shooting boots. Bamford looks unusually nervous, something betrayed by his recent habit of dashing down the tunnel, perhaps to visit the lavatory, shortly before he is due to come on as a substitute. However Marsch is not alone in suspecting that once Bamford scores his first goal and the pressure eases, a lot more will follow.

Numbers can be deceiving but directors at a club that is 44% owned by the statistics-obsessed, NFL-rooted San Francisco 49ers Enterprises have noted that Leeds’ expected goals tally is the seventh-best in the Premier League and the same goes for their average possession quotient of 52.5%.

Moreover, despite some calamitous individual mistakes, the team’s overall defending is pretty decent, with only six top-flight rivals facing fewer shots on target from opponents. “We know we’re close,” says Marsch, who spent the summer balancing the books.

Marsch knows not signing reliable cover for Bamford represented a big mistake but remains too polite to point fingers. “I’m not going to start playing hindsight or throw anyone under the bus,” he says. He is close to the club’s Spanish director of football, Victor Orta, and is well aware that money needs to be found to redevelop the dated Elland Road.

Orta identified Marsch ahead of 39 other longlisted coaches as Bielsa’s best-equipped successor and appears loth to rip up a pressing philosophy it is hard to envisage Rafael Benítez, to name one potential new Leeds manager, retaining. Even more crucially, the team, who face a vital home game against Bournemouth next Saturday, seem still to be buying into Marsch’s message.

“We’re fully behind the manager, we believe in Jesse,” says the captain, Liam Cooper. “We’ve let ourselves down.”

A certain level of cynicism at such sentiments is understandable, but Cooper does not do platitudes. He is noted for his sincerity, and like most of his teammates he seemingly enjoys working with a non-hierarchical coach who is happy to hold detailed tactical debates and share jokes on WhatsApp with players he treats as adults.

Along the road to Leeds, Marsch watched his father work night shifts on the assembly line of a Racine tractor factory, penned a 117-page Princeton dissertation on earthquake awareness in California, and took his wife and three children on a six-month backpacking trip around south-east Asia and the Middle East, with Egypt a favourite stop-off.

Such diverse experiences have made him very good at connecting with all sorts of people. For the moment at least, that knack appears to be keeping the Leeds boardroom and dressing room, if not the fanbase, onside.

“I’m not done here,” maintains Marsch. “But I’m not dumb … I understand that, if we don’t win, I put the board in a difficult position.”

Is Kelly Ripa leaving Live with Kelly and Ryan?

Darts fans are making fun of Wade for leaving the UK Open after the...

A mother with a sick child is blocked by eco-barriers – but the police...