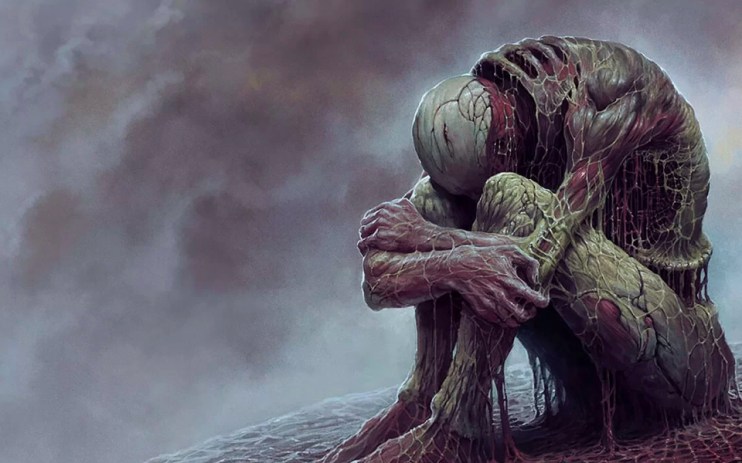 Scorn is the kind of game that makes you wonder what the whole deal is with humans. It’s designed in every way to be as unnerving, unpleasant and uncomfortable as possible, and yet it’s a compelling, even thrilling seven hours of your life.

Designed by Serbian studio Ebb Software, it’s a love letter to Alien designer HR Giger and Polish painter Zdzisław Beksiński, a horrific trudge through a biomechanical nightmarescape that would make a xenomorph feel out of sorts.

You awaken bound to the floor by some intestinal root system, and things only get worse from there. Your character, a humanoid figure flayed of its flesh, is forever on the cusp of being subsumed into the environment. This world is not made up of rooms and doors and corridors but orifices and sphincters and apertures. The walls around you pulse and breathe and bleed. You don’t press buttons, you slide fingers into fleshy crevices. It’s all extremely icky.

For the first few hours Scorn is essentially a walking simulator with some light environmental puzzles. Nothing is explained – there is no dialogue – and you must feel your way through the hostile alien world, often literally.

To progress through the opening area, for instance, you must ram a phallic appendage into a bloody hole in order to deposit some kind of terrible baby into a handcart, which you must then feed to a living ice cream scoop. To do this you’ll need to flick railway junctions into the correct positions, which requires some logical thinking. Later you solve a more complex spatial puzzle that involves sluicing a pile of corpses from a passageway using an acid-spraying tentacle. Again, gross.

Everything  you see in Scorn feels like it has been made for a terrible purpose, but one you can’t possibly comprehend. Are you here for it, or is it here for you? Are you food for some unknowable creature, or are you a part of it? Was this world built, or did it grow?

The Horror Show! at Somerset House is bizarre and brilliant

Scorn is at its best when it’s posing these philosophical questions, less so when it’s trying to be a video game, and as rudimentary shooting is introduced, morbid curiosity is replaced by anxiety and frustration.

The fact the areas in which you find yourself are so horrifically detailed means it’s often hard to tell which holes you need to stick your fingers into and which ones are just there for show, which can lead to aimless traversal of the same network of corridors as you wait for your cursor to indicate an intractable object.

I also found the combination of queasy motion blur and a fixed field of view triggered a mild motion sickness, which, while thematically appropriate, is not pleasant.

Still, there are few games quite as singular as Scorn in their mission to make your skin crawl, and if you’re looking for an alternative to classic horror movies this Halloween weekend, Scorn is sure to hit the moist, bloody spot.

Employer News :Why is Assessment necessary to hire the right talent?

A data-infused education system: the future