WE’VE all had those jobs from hell that have landed us in seriously awkward situations.

And shooting the Harry Styles film Don’t Worry Darling sounds like a pretty toe-curling experience to me.

I’m told director Olivia Wilde, who is dating Harry — personally removed the intimacy co-ordinator on set so she could take a leading role in overseeing his and Florence Pugh’s sex scenes in the Fifties psychological thriller.

Insiders said Olivia made the decision after learning of a kiss between Florence and Harry at the start of the production, before they were even officially a couple.

A source said: “Everyone working on Don’t Worry Darling was as professional as possible.

“But it’s safe to say people were all tested at times. 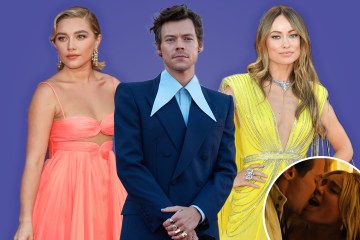 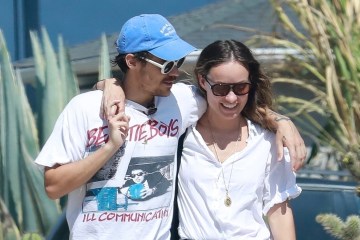 “After Olivia found out about the kiss between Harry and Florence, she appeared to try and make her presence more known.

“She even decided she wanted to oversee the sex scenes herself and got rid of the intimacy co-ordinator.

“Obviously as the film’s director, she was well within her right to do so.

“But it raised more than a few eyebrows because of what had gone on between Harry and Florence — and then Harry and Olivia.”

Previously, Olivia admitted one of her main goals of the film was to produce high-quality sex scenes to show how “incredibly debaucherous” the Fifties were.

While the director was keen to up the sexual ante, Florence made it very clear that she was not impressed about the focus of films being solely on the bedroom.

She said: “When it’s reduced to your sex scenes or to watch the most famous man in the world go down on someone, it’s not why we do it.

“It’s not why I’m in this industry. Obviously, the nature of hiring the most famous pop star in the world, you’re going to have conversations like that.

“But that’s just not what I’m going to be discussing because this movie is bigger and better than that.

“And the people who made it are bigger and better than that.”

I KNOW how much they love the beautiful game.

So it comes as no surprise that singer and DJ duo Tom Grennan and Joel Corry are cooking up something special for the England team when they jet off to Qatar to compete in the World Cup next month.

I can reveal that the lads plan to give their new single Lion Heart a footie-inspired makeover to boost support.

A source said: “It’s early days but the record label is holding talks about the prospect of filming a second music video for Lion Heart in time for the World Cup.

“The song is an anthem in itself and the title is already linked to Three Lions. Those behind the talks think the song could become the unofficial track of the England campaign.

“Tom is friends with some of the squad, including Jack Grealish, after he performed at Harry Maguire’s wedding reception this summer.

“The dream would be to get them on board but the FA have pretty strict rules, which means it might not work out.”

Here’s hoping they can pull it out of the bag.

UNLIKELY pals Dermot O’Leary and Gene Gallagher were seen battling it out in 5-a-side game.

Manchester City fan Gene, son of Oasis rocker Liam, got kitted out in his his Sky Blues shirt for the kickabout with Dermot, who supports current Premier League leaders Arsenal.

Things got pretty heated in the game, with Gene giving Dermot a run for his money when it came to fancy footwork.

Still, I have no doubt City will soon overtake the Gunners at the top of the table. My team, Everton, are currently languishing in 12th. Nothing ever changes, eh?

TAYLOR SWIFT has cemented herself as the biggest pop act on the planet thanks to the stellar success of her new album Midnights.

The US superstar landed the highest- selling album of the year and it hit the UK No1 spot yesterday.

Midnights is also officially the album with most day-one Spotify streams.

The figures are astonishing but well deserved. Congratulations, Taylor.

NATHAN DAWE is swapping the decks for dishes by starting his own restaurant.

The 21 Reasons DJ plans to open the venue in his hometown of Burton upon Trent in Staffordshire later this year.

He hopes to combine his passions of grub, music and football by getting pal Jack Grealish to hit the turntables at the launch.

Nathan befriended the England and Man City midfielder when he played for his team Aston Villa, and Jack recently told how he wants to make it as a DJ himself.

Nathan said in an exclusive chat: “I know Jack from his Villa days and he’s a lovely lad. I’m going to have to give him some lessons I think.

“When the restaurant opens, I’ll get him to come down and on to the decks to see what he’s like.”

On having the footballer do DJing at the opening night, he added: “I’ll drop him a message and see what he wants for it. I might just give him a free burger or something to come down.”

Nathan added: “I always wanted to do a restaurant and bar in my hometown with music on and stuff. It’s slap bang in the middle of the town centre, so I couldn’t turn it down.

“It’s called Isabels and is named after my late nan, who passed away in lockdown. It’s super-exciting.”

Nathan explained: “When I have been playing the original, a lot of the younger people don’t know it and a lot of the older ones do.

“So I was thinking, if we can sample this and give it a new lease of life, it’s going to have wider appeal.”

Queen Shania is back

SHANIA TWAIN has announced her new album Queen Of Me will be released on February 3.

The singer, whose latest track Last Day Of Summer is out now, will also tour the UK next year.

She will play five dates, kicking off at London’s O2 Arena on September 16, before Dublin, Glasgow, Manchester and Birmingham in the days that follow.

Meanwhile, The Hunna, whose self-titled album came out yesterday, have dropped the video for their new single, Fugazi.

They drafted in The Hills star Justin Bobby for the video. He transforms into a beer-swilling bad boy.

DUA LIPA is all revved up. She wore red and white Givenchy racing leathers on a break from her Future Nostalgia World Tour.

Dua flew to Japan this month and has been enjoying the sights and sounds of Tokyo and its surrounding islands.

The singer gets back to work on Wednesday, with the first of two gigs in Auckland, New Zealand.

Dua has been using her time on the road to start work on a third record.

She said: “As I’m writing my new album, I feel even more liberated in a completely different way – and even more in control than I thought.”

‘My Husband’s Cheating With A Younger Woman. How Do I Get Him Back?’