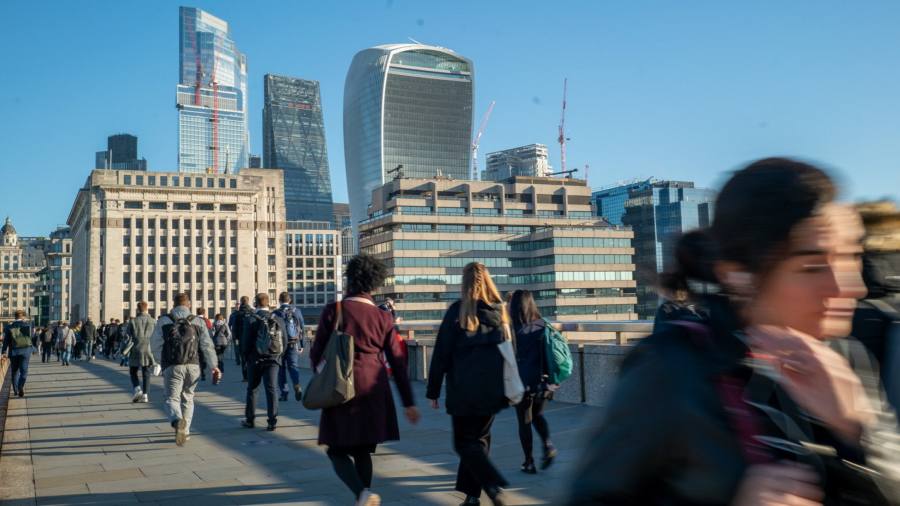 A change in official estimates of immigration to reflect a recent surge in hiring of overseas workers by British employers could fill as much as £5bn of the hole in the UK public finances, according to economists.

While businesses are lobbying for changes to immigration rules to bring in more overseas workers, a much bigger issue for the public finances is whether the Office for Budget Responsibility updates assumptions on population growth that underpins its borrowing forecasts.

The UK fiscal watchdog is due to publish a new set of forecasts alongside chancellor Jeremy Hunt’s autumn statement on November 17, in which he will seek to show debt falling as a share of gross domestic product in the medium term.

In March, the OBR took the view that net migration would settle at an annual rate of just 129,000 — well below its historic average — because it expected Brexit to have a significant lasting effect on arrivals from the EU that would be offset only partly by immigration from outside the bloc.

Data released since then suggest immigration has rebounded from its post-pandemic slump to much higher levels. The Office for National Statistics estimated net migration at about 239,000 for the year to June 2021.

Home Office statistics on visas issued in the year to this June point to a big rise in immigration from outside the EU, partly reflecting arrivals from Ukraine and Hong Kong and a surge in overseas recruitment by the NHS.

Alan Manning, former head of the government’s Migration Advisory Committee, said 2022 was likely to be a “record-breaking year” for inward migration and that even if inflows subsequently moderated, the OBR’s long-term assumptions looked “way too low”.

Madeleine Sumption, director of Oxford university’s Migration Observatory, said that even without policy change, it would be surprising if net migration settled below 200,000, with higher inflows likely in the short term.

Higher immigration would not necessarily change GDP per capita, but it could make a big difference to the OBR’s forecasts for the public finances.

This is because it boosts the taxpaying workforce without changing the government’s short-term plans for public spending. Because migrants are more likely to be of working age, they also raise the employment rate and make little difference to welfare spending.

OBR analysis from 2016 suggests an 80,000 rise in net migration could cut borrowing by almost £6bn after five years. But a later OBR study focused on lower-earning EU migrants showed a smaller impact.

Jonathan Portes, professor at King’s College London, said there were good grounds for the OBR to raise its forecast for net migration by at least 100,000 and that this could cut borrowing by as much as £8bn by the end of its five-year forecast horizon.

Other economists said that even if the OBR took a more conservative approach, the cumulative effect of higher immigration could cut about £5bn of the estimated £30bn to £40bn hole in the public finances that Hunt aims to fill in the autumn statement.

This improvement in the outlook for the public finances could be bolstered by any steps the government takes to overhaul the visa regime for overseas workers coming to the UK.

Towards the end of Boris Johnson’s government, the then home secretary Priti Patel was preparing reforms to speed up the processing of visas.

This was paused when Johnson quit, as was a Migration Advisory Committee review of the list of occupations for which visa rules are relaxed.

Under Liz Truss’s government, wider reforms to admit more low-skilled workers were considered, but these sparked a dispute between Truss and Suella Braverman linked to the then home secretary’s resignation.

Officials said Braverman, reappointed home secretary by Rishi Sunak, was now focused on proposals to speed up the processing of visas. Her allies said no decisions had been taken.

Economists said any policy changes would be unlikely to make a big difference to the number of overseas workers entering the UK.

The government declined to comment, as did the OBR.

Tunisia and the UK have signed a memorial on renewable energy

Who is Declan Donnelly’s wife Ali Astall and how many children do they have?...