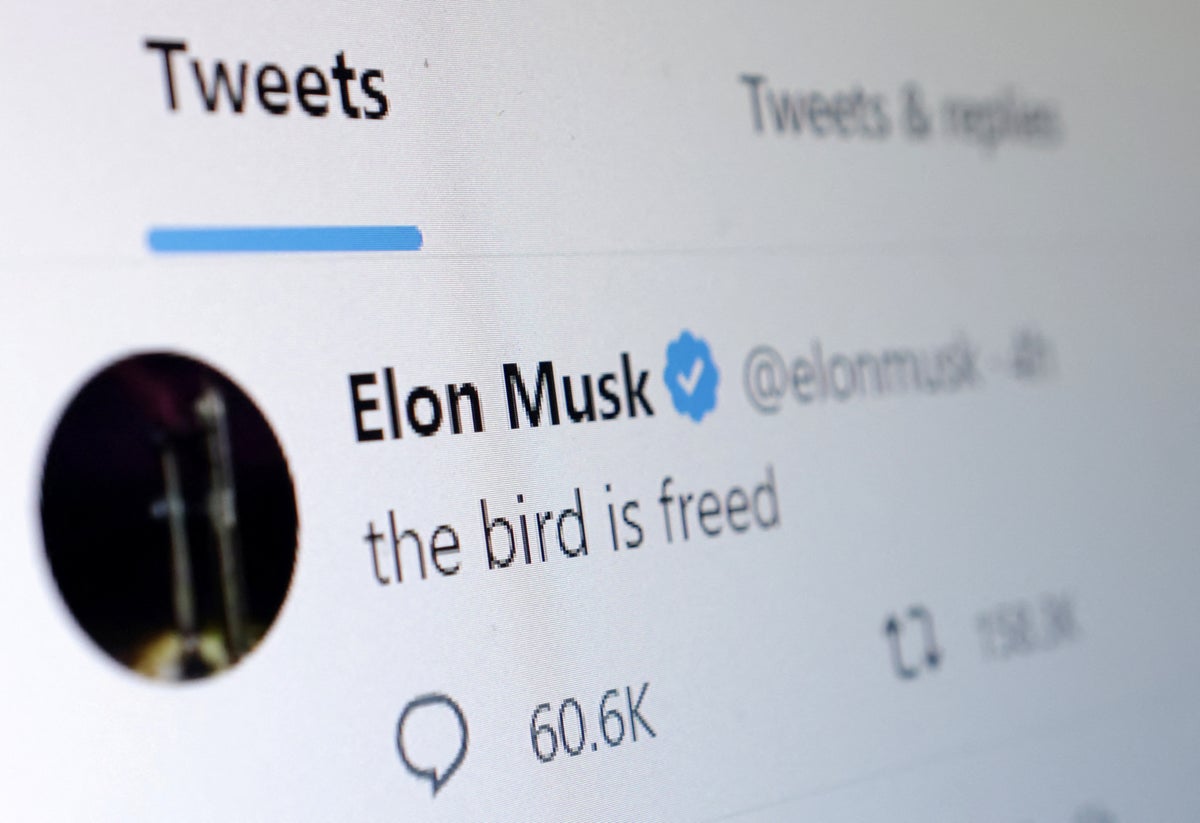 Twitter’s new owner Elon Musk has said banned users will not be reinstated until after a review by a “content moderation council”.

Employees and users are waiting to hear more from Mr Musk about his plans for the platform, amid concerns over his support for loosening content moderation and reversing permanent bans on controversial accounts.

Mr Musk’s latest comment appears to mean no immediate return to Twitter for several high-profile and polarising figures who had been previously banned, including former US president Donald Trump.

Mr Musk was expected to address staff at the company’s headquarters in San Francisco late on Friday, after completing his £38bn takeover of the social media company, signaling the end of a back-and-forth between the billionaire and the website that has lasted for months.

The deal became official via a Securities and Exchange Commission filing. Twitter says it “became effective” on Thursday.

Mr Musk had offered a hostile takeover of Twitter for $54.20 per share with banks – most notably Morgan Stanley – financing $13bn of the $44bn takeover, and Mr Musk paying the rest through Tesla stock and other personal wealth.

Mr Musk’s path to becoming head of Twitter is more convoluted than other takeovers, as may be expected by a billionaire who said he would take Tesla private at $420 per share in 2018 because, as the Securities and Exchange Commission would write, “he had recently learned about the number’s significance in marijuana culture”.

In April, Mr Musk purchased 9.1 per cent of Twitter, and the company offered him a seat on its board – which would restrict him to buying up to 15 per cent of the company.

Mr Musk accepted, then declined, the seat, before offering to then purchase the entire company.

What Mr Musk wanted to do with Twitter was then hotly debated.

“Free speech is the bedrock of a functioning democracy, and Twitter is the digital town square where matters vital to the future of humanity are debated”, Mr Musk said in his announcement.

“I also want to make Twitter better than ever by enhancing the product with new features, making the algorithms open source to increase trust, defeating the spam bots, and authenticating all humans.”

Since that statement, Mr Musk proclaimed his approach to free speech: “If people want less free speech, they will ask government to pass laws to that effect,” Mr Musk said on Twitter. “Therefore, going beyond the law is contrary to the will of the people.”

Lewis Wiltshire, Twitter’s former head of sport, said it is “hard to imagine a bigger misnomer than ‘free speech’”, adding that it is a mistake to think of it as “one, neat ideology”.

The Indian government also demanded that Twitter block the accounts of journalists and activists, something the social media site refused to do saying it would “violate their fundamental right to free expression under Indian law”.

However, it would be Mr Musk’s view of spam bots that would delay the deal – and, potentially, have brought it to a complete halt.

Mr Musk claimed the deal was “on hold”, alleging that Twitter had been misleading regarding the number of bots on the platform, and infamously tweeted a poop emoji at current Twitter chief Parag Agrawal. Twitter denied this. The emoji would go on to appear in legal documents ahead of the preliminary proceedings of a trial between Mr Musk and Twitter, which the social media company instigated after the billionaire finally said he was walking away from the deal.

Twitter sued Mr Musk to carry out the acquisition, and Mr Musk filed a countersuit shortly after. The trial was planned to take place over five days, between 17 October and 21 October, in the Delaware Court of Chancery – where many US companies are registered and as such has a great amount of expertise in corporate cases.

Over 1.8 million businesses are incorporated in Delaware, including more than two-thirds of Fortune 500 companies, according to the State Division of Corporations.

Many experts believed that Mr Musk’s evidence would not have allowed him to escape the deal, while during the trial many of Mr Musk’s personal Signal messages were released as Twitter sought access for relevant material.

One of Mr Musk’s conversations was with podcast host Joe Rogan, who recommended that Mr Musk should “liberate Twitter from the censorship happy mob”.

Donald Trump celebrated Elon Musk’s purchase of Twitter by posting on his own platform, Truth Social.

“TRUTH SOCIAL has become somewhat of a phenomena. Last week it had bigger numbers than all other platforms, including TikTok, Twitter, Facebook, and the rest. It also looks and works better to my eye. I am very happy that Twitter is now in sane hands, and will no longer be run by Radical Left Lunatics and Maniacs that truly hate our country,” Mr Trump said.

“Twitter must now work hard to rid itself of all of the bots and fake accounts that have hurt it so badly. It will be much smaller, but better. I LOVE TRUTH!”

Mr Musk said tweeted that “the bird is freed”, but Thierry Breton, the EU commissioner for internal market, quote-tweeted that it will “fly by our rules”.

Mr Breton also tweeted a video from Mr Musk six months ago in which the two men apparently agreed about the Digital Services Act legislation that would monitor online posts.