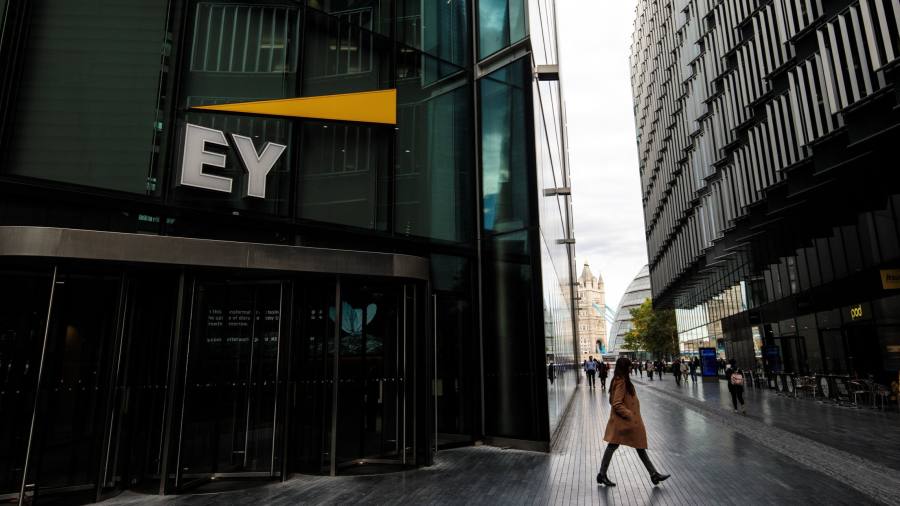 EY’s average partner pay in the UK has hit a record £803,000 after a surge in demand for the Big Four firm’s consultants fuelled a sharp increase in full-year profits.

The strong performance comes as EY partners around the world prepare to vote on a proposed split of its audit and advisory businesses, which bosses hope will result in faster growth.

Profits across the consulting sector have soared as large companies seek advice on overhauling their technology, with business shifting online and to the cloud.

Hywel Ball, UK chair and senior partner of the 18,900-person firm, said partner pay had risen more slowly than overall profits because EY had invested more of its surplus back into its business when compared with its rivals.

Ball pointed to EY’s addition of 200 staff through the acquisition of five technology consulting businesses last year. The firm also increased the number of equity partners from 781 to 854, even as its rival KPMG’s partnership shrunk to the smallest in at least two decades.

The firm is the third of the Big Four to announce its UK results for the most recent financial year. Partners at Deloitte and PwC received an average share of profits of more than £1mn, though PwC’s figures were boosted by the sale of part of its business. KPMG has yet to report its most recent annual results.

Alongside the results, EY announced that pay for graduates would rise 13 per cent to an average of £32,000 while school leavers joining as apprentices will get an 11 per cent increase to £22,000.

The pay rises, which will help the nearly 1,500 people who joined EY out of schools and universities last year, follow at least a decade of near-stagnant salaries for entry level accountants.

Ball said the pay hikes recognised that younger staff have been hit disproportionately by the rising cost of living.

The employee bonus pot was increased by more than half to £110mn while the firm expects salary increases to cost it £106mn in the current financial year.

There had been a “slight softening” in demand as the economic outlook darkens, said Ball. But clients still tend to need advice in a downturn, when they tend to “shift the types of services they look for”, he added.

Outside of its consulting business, EY’s tax department increased revenues by 15 per cent to £934mn while a strong flow of dealmaking helped boost sales in the strategy and transactions division by 10 per cent to £590mn.

The audit and assurance business boosted revenues by 11 per cent to £817mn. Audit fees have been rising as the Big Four respond to increased regulatory scrutiny of their work, though Ball said the rise in revenues was partly because of the addition of new clients such as wealth manager Brewin Dolphin, estate agent Countrywide and construction group Morgan Sindall.

Ball said no date had yet been set for UK partners to vote on whether to back plans to split its audit and advisory operations globally. The votes were expected to begin in November and continue until early next year.

Why Dogecoin Spin-Off Floki Inu Is Up 50% Today, Leaving Bitcoin And Ethereum In...